If the kernel were (not a colonel) a general, the general is Caesar (swift, sudden and devastating attacks!), my poor iMac is Vercingetorix (doomed!), and his luck has run out–

Today it’s crossed a threshold and it’s utterly unusable– even with nothing running save iTunes, it experienced the panic. I’m waiting to hear from the computer fix-it folks to make an appointment to come here loaded down with new hardware to try to revive this poor, overworked provincial. The Apple Care guys were great and it makes me wish I’d called sooner, but it’s difficult to fathom having one’s computer’s innards poked about during crucial deadlines! But here I am, anyway. Thank god for the laptop. 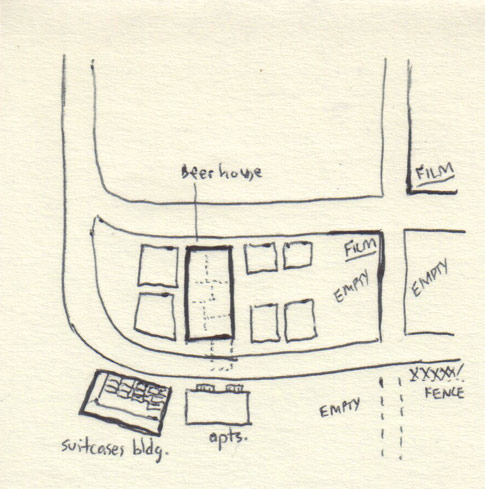 Here is a post-it map drawn from a dream I woke with yesterday morning (maps have prevailed of late). The transcribing took an hour and  much of it involved descriptions of the buildings and the area. The summary:

In which stacks of garishly-painted suitcases create a new facade on a building; a newly-opened beer hotspot engulfs a portion of the street behind to create a secret music space; Ben informs a stranger of his plans of going back to school, somewhere far away.

Warm weather inflicts a kind of rampant madness in this town– you’d swear the whole city had set to destroying itself from the increasing frequency of sirens. It makes the joy of all windows open sightly vexing, and more difficult to fall alseep at night. Have to get used to it again.