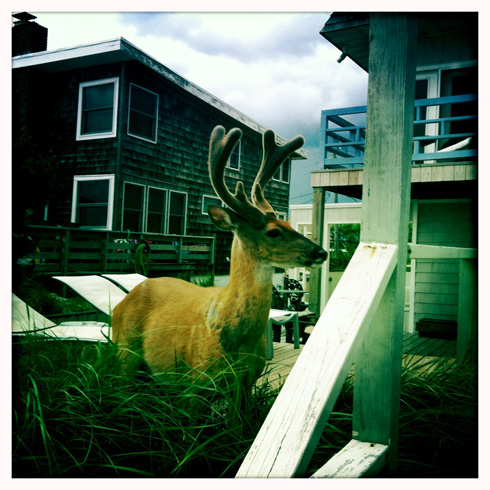 July already! 2012 is halfway gone. Last week was the first of the summer trips, and a beach week. Sunday at Fort Tilden followed by 4 days in Fire Island with a gaggle of friends. And quite a few ticky deer, poor things. They are bold, though, as evidenced by the above photograph. Since returning the heat has come on in a fierce way and shows no sign of letting up anytime soon. Today I’ve been in the air conditioning all day.

I’ve posted so rarely here in recent months— work has been steady-to-busy, and has included this, this, and this, among other things.  In between have been bike rides, Prospect Park and beach time, and Jeu de Tarot! Yesterday I saw the new Wes Anderson film, Moonrise Kingdom, which was an utter delight; I’d like to see it again.

Beth and I have hatched a plan to work on some collaborative pieces. We’ve talked about things like this before, but nothing has ever come to life; today we realized that was most likely because we tend to let the ideas spiral into these grand plans, vast and unwieldy— overextended in the conception phase to the point where they become too intimidating or feeling over-thought. So this time we are not planning at all: no rules and no expectations other than imposed deadlines to keep us on track. They will probably be posted here, progress photos.